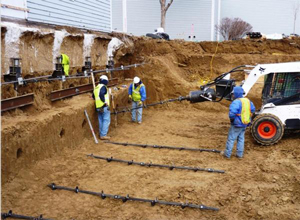 The developer was worried that his construction project was about to stop dead in its tracks. His new building needed a full basement, but the basement excavation would be less than 15 feet from another building with a slab foundation. "You'll cause a cave in," his partner warned. "We can't risk damaging the neighboring building and its parking lot if the excavation collapses."

Fortunately, the developer had the good fortune to find out about a quick, affordable way to build a retaining wall as the basement excavation was being made. The foundation repair specialist the developer hired explained that the retaining wall could be built from the top down instead of from the bottom of a deep excavation, using a technique that would save time and money while also reducing the risk of a wall collapse.

As the name suggests, a soil nail is a steel fastener designed to be driven into the earth in order to increase the strength and stability of walls and slopes. Helical plates welded to the shank of a soil nail are designed to pull the nail into the earth like a screw as the shank of the nail is rotated. The same helical plates help stabilize the surrounding soil while also preventing the nail from pulling out. Helical piers and helical tiebacks are other foundation repair products that operate on the same principles as soil nails.

The use of soil nails was pioneered in Europe during tunneling operations. When this technology crossed the ocean in the late 1960s, engineers in the U.S. found soil nails very useful during highway construction, when retaining walls and large, steep-sloped entrance ramps had to be built.

One of the great advantages offered by soil nails is that they enable you to build a retaining wall from the top down, in increments of 6ft. or so. Although the building foundation mentioned above has straight walls that meet in square corners, a soil nail retaining wall can just as easily be curved.

Shotcrete is applied after nails are in place

The size, length and spacing of soil nails are determined by structural engineers based on a soil evaluation at the building site. When all nails have been driven in the wall of the first excavation, workers apply a shotcrete facing that's usually between 3 in. and 6 in. thick. Drainage matting material and steel mesh are sometimes incorporated into this spay-applied wall. Promoting good drainage helps to prevent hydrostatic pressure from building up behind the wall. The steel mesh is included to increase the strength of the concrete.

When the first "dig" complete, another excavation is made and the same nail and shotcrete installation is repeated. This sequence gets the retaining wall built in safe, manageable increments, without the risk or expense of making a single full-depth excavation and erecting a concrete block or poured-concrete wall. In the case mentioned above, the soil nail and shotcrete retaining wall simply stabilized the foundation hole while permanent reinforced concrete basement walls were formed and poured. But these walls can also serve as primary, stand-alone retaining walls in other applications.

At Level Tech, we're proud of our permanent, warranted solutions for foundation problems of all types. Our team of professional contractors have repaired foundations throughout Louisiana and Arkansas, and we're ready to help you.

Looking for a price? Get a no cost, no obligation free estimate.

We serve the following areas